The Creativity of the Foreclosed Option 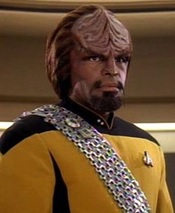 In an episode of Star Trek, The Next Generation, the Klingon Worf was in an accident leaving him paralyzed. According to Klingon tradition, this meant he should commit ritual suicide. He was intent on doing so.

The doctor was appalled. She tried to research Klingon physiology to find treatment, but Klingons had no advice to give. Since they always committed suicide on such occasions, they had no information.

Various creative things were tried for allowing him to live and function with dignity even if not with full use of his legs. Finally, the doctor found a procedure which cured him. Solutions could be found because one option – the option of suicide – was, in the doctor’s mind, foreclosed.

When a specific option is unavailable, others must be sought. Medical breakthroughs, along with treatment options and other caring options for those with disabilities, require that the option of suicide be off the table.

Once a violent solution is on the table, it precludes the development of alternatives. Violence as a problem-solving technique has the apparent advantage of being quick and efficient. One need only ignore the long-term aftermath and other negative impact on society.

Nonviolent alternatives must take more care, attention, resources and time. They have obvious advantages in the long run. But the short-term consequence is more work.

This leads to the ironic outcome that foreclosing an option, taking it off the table, means more options available, rather than fewer.

Vegetarians, for example, who foreclose the option of eating meat, actually have more variety in their diets than those eating standard fare. There’s no reason in theory why those who eat meat can’t also eat the variety of vegetarian options. Often they do. But excluding meat seems to open up creativity in the diet.

Those who oppose abortion have a much more extensive and complex set of services offered through pregnancy help centers, maternity homes, mentoring, and government social services than the relative simplicity of the abortion clinic.

In the case of war, those who by definition foreclose it as an option entirely – pacifists – have offered a wide array of ways of dealing with problems of violence and injustice: conflict resolution, diplomacy, solving problems when they’re still small and haven’t yet blown up in violence, and a wide variety of other approaches. People inclined to resort to weapons are less likely to be creative in finding alternative ways of resolving problems. Those who oppose war must come up with such alternatives.

Therefore, creativity is another of the side-effects of assertive nonviolence. In the psychology of creativity, this is called “divergent thinking.” Many possible solutions are generated when people don’t limit themselves to the obvious or conventional.