The Mind’s Drive for Consistency

Editor’s Note: This is the sixth in the series of blog posts based on presentations at our 30th Anniversary conference, held August 4-6, 2017. The presentation this post is based on was given at the session of the Consistent Life Network’s research arm, The Institute for Integrated Social Analysis.

Any bit of knowledge a person has about self or environment is a “cognition.” This can be a known fact or a vague concept, or anything in between.

When you have two of these cognitions, the relationship between the two is “consonant” if they agree with each other. Hugging someone is consonant if you are fond of that person.

But if one cognition would imply another, but the opposite is what is actually believed, if there is a contradiction, then the two elements are “dissonant” (the scholarly way of saying they’re out of whack). Slapping someone you are fond of, or voting for someone you don’t really believe is qualified, are examples.

Whenever someone has any cognitions that disagree with each other, she or he experiences cognitive dissonance. This is a tension, and it motivates action. Most people try to seek relief from this instability in their thoughts. They may or may not succeed in reducing it, but most commonly, they will try. There will be some attempt to get rid of the problem by changing one element or the other to either make the two agree or make one irrelevant.

Strategies for dealing with cognitive dissonance vary from person to person. But this dissonance is a strain, and people do try to get relief from it. Research has seemed to confirm theories that it is a type of stress.

The studies have a strong conclusion: human beings apparently have a basic psychological need to have consistency, stability, and order in the way they see the world. When new information threatens their previous views or assumptions, they feel uneasy and resort to defensive maneuvers of one kind or another. They may “screen out” upsetting experiences. They may deny obvious facts. They may try to reinforce beliefs by making aggressive and belligerent declarations.

So now let’s consider, for the case of abortion, what the situation has been in the United States over the last decades. 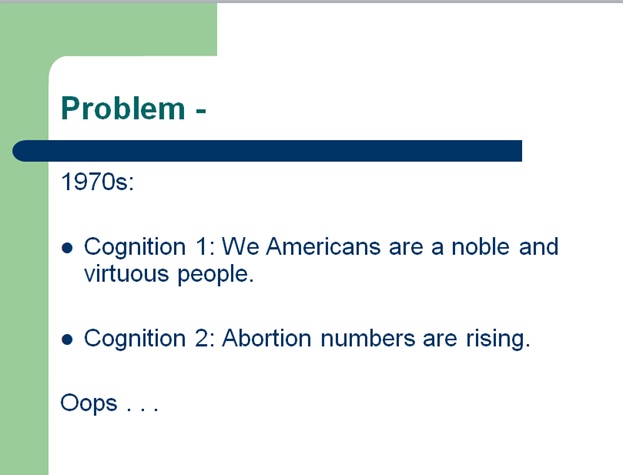 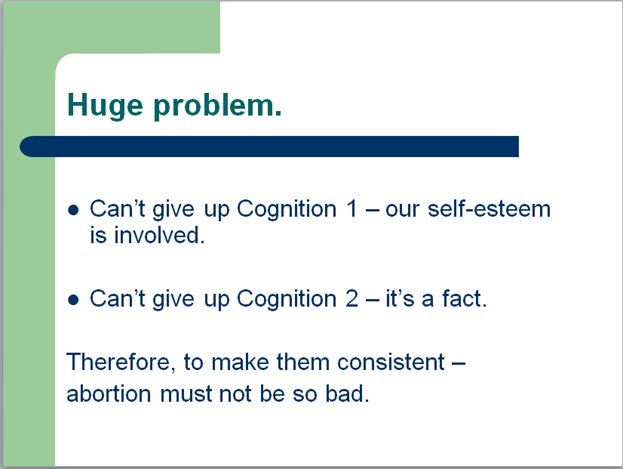 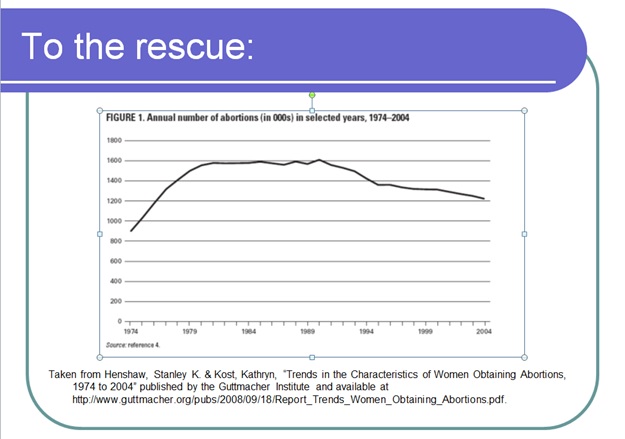 And a greater downturn is on the way. Repeat abortions are becoming a greater proportion of all abortions. More abortions are being conducted on women who’ve already had at least one before. That’s what’s keeping the numbers up as high as they are.

But having a first is a prerequisite to being a repeater. No one has a second abortion until she’s had her first one. The pool of first-timers has gone down more dramatically. That’s the pool from which repeaters draw. And repeaters will at least hit menopause eventually.

Therefore, as repeaters drop by attrition, a deeper plunge may be coming.

∞  In the 1990s, the Supreme Court allowed laws like informed consent & parental involvement.

∞   Ultrasound technology – lots of young people have photos of themselves as fetuses up on their refrigerator doors. 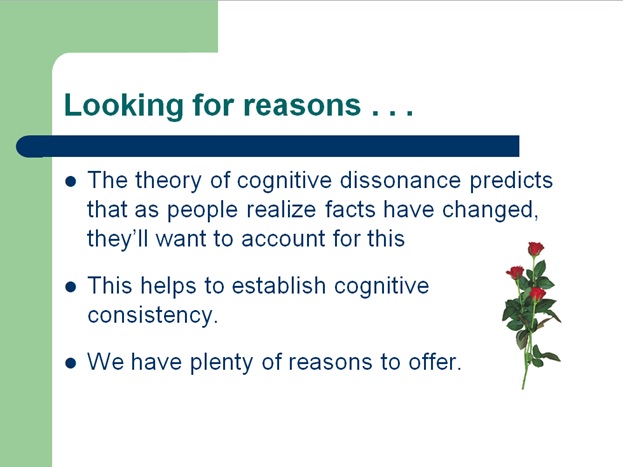 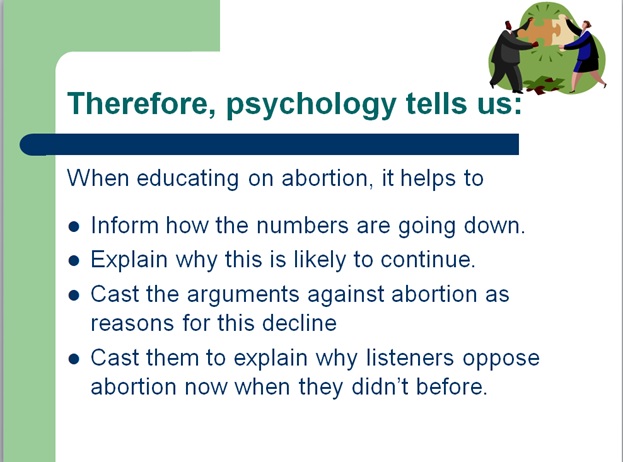 Applying this also to the Death Penalty, Euthanasia, and Infanticide

These are now shadows of the carnage they used to be. Psychology says, keep pointing that out!

And as hard as it is to believe from the news, deaths from war are declining as well: 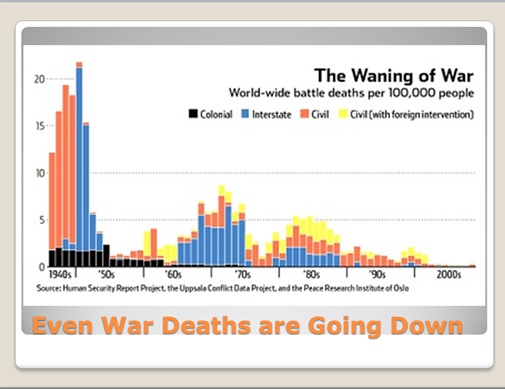 Also, nuclear weapons stockpiles, while still absurdly high, are way down from where they used to be:

Much as activists are tempted to get people excited about how terrible the situation is on any of these issues, on the idea that this will motivate people to action, psychology shows the opposite is the case.

People are more motivated if they know that violence they oppose is in fact waning. When that can be said truthfully, it’s important to make the point.

The rest of our series of blog posts from presentations at our 30th anniversary conference in August, 2017:

The History of Framing the Arguments (Jim Kelly)

Making the Case for Peace to Conservatives (John Whitehead)

My Difficulty in Voting: Identifying the Problem (Monica Sohler)