#Rehumanize2020: Experiences of a Virtual Conference

Posted on September 1, 2020 By Rachel MacNair 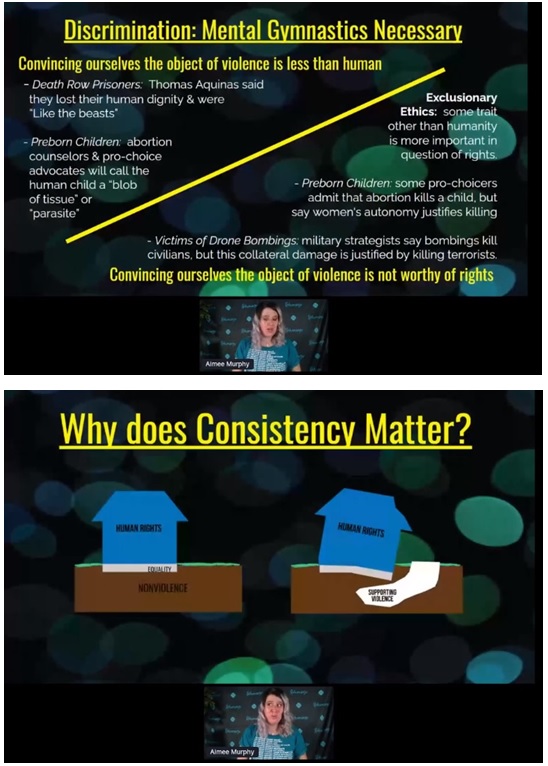 As always, our friends at member group Rehumanize International did a great job of bringing together a diverse group of activists to discuss an array of issues encompassed by the consistent life ethic—with the added technical accomplishment this year of doing it all online! Indeed, diversity was one recurring theme of the presentations that made a particular impression on me.

Herb Geraghty, Rehumanize’s Outreach Director, spoke about the importance of “radical inclusivity.” This goal, Herb argued, should guide not only whom activists strive to protect from violence but also whom activists are willing to work with. 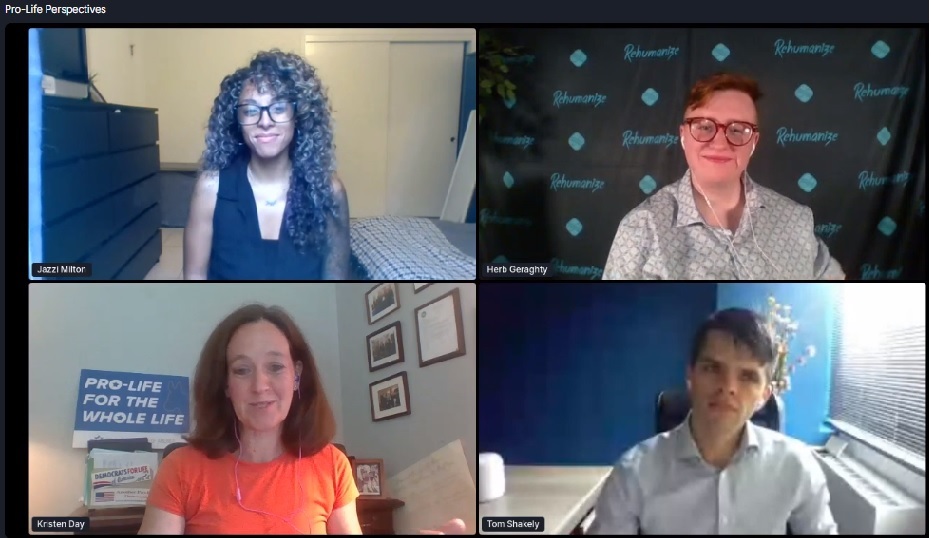 Later, a panel discussion on pro-life activism (pictured above) discussed the value of many different types of diversity: racial, religious, and political diversity among activists, but also diversity of focus. Some activist groups may address several different life issues, while others focus on one specific issue; the panelists talked about the advantages of both approaches.

In a breakout talk about Creative Expression, Rehumanize’s Creative Projects Director Maria Oswalt and Consistent Life Board Member Sarah Terzo spoke about how art can be used to promote respect for life. This talk touched on the value of another kind of diversity, diversity of talents. People whose abilities or interests or life situation draw them toward artistic expression should pursue that form of activism. Maria emphasized the importance of doing what you have a talent and passion for, rather than vainly trying to do all types of activism simultaneously. I thought this was a valuable—and heartening—piece of advice.

As usual, this conference was jam-packed with edifying content. As with previous in-person conferences I’ve attended, I appreciated the format Rehumanize has developed featuring multiple mainstage keynote speakers and panels, ensuring that all attendees got the chance to hear from a diverse set of speakers on a healthy variety of consistent-life issues. Two back-to-back panels – one on police, prisons and the death penalty, and the other on pro-life perspectives – provided rich conversation among people working on the same issues from a range of personal backgrounds and approaches.

I was particularly heartened to see a stronger position on ethical and practical reasoning for opposing war sketched out by David Swanson of World Beyond War as a keynote presentation, while still finding it unsettling that attendees at a CLE conference remain more evenly divided on making exceptions for this form of violence than for most others.

Differing views throughout the conference, however, were nuanced and respectful. Although I missed the in-depth conversations and personal connections of an in-person conference, the chat feature intriguingly allowed for ongoing discussion of presentations in real time.

A final highlight was the Create/Encounter “release party” showcasing the winners of the annual creative writing & art contests, with an especially strong set of written submissions.

All in all, our friends at Rehumanize did their usual impressive job (even under unusual circumstances) of pulling a full, mutually encouraging and thought-provoking conference together. Bravi.

As organizer Herb Geraghty said at the beginning, we need to practice “radical inclusivity”. By that, Herb meant, we must be inclusive not only regarding the people we are for, but we are also inclusive regarding the people we are with. We don’t dehumanize anyone among those with whom we are fighting, nor even among our opponents. No one should be addressed with hateful language. 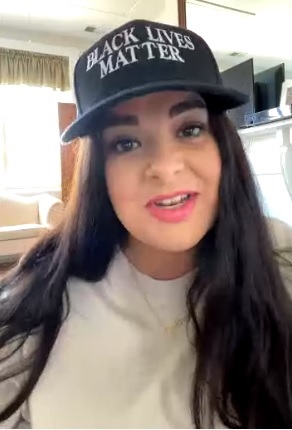 Terrisa Bukovinac emphasized that Operation Rescue was originally a completely non-violent movement of passive sit-ins by those who wished to take upon themselves a part of the violence against the unborn. Where possible, let us participate in that non-violent, peaceful movement to reach out at the last moment to the women who are about to undergo abortions inside abortion clinics.

The advantages of an in-person conference are great enough that when we can again I’ll still want to take the travel and lodging in order to experience it. But the conference on Hopin had a huge advantage: there were over 250 people attending, much more than usual, and some of them were from other countries. I’ve seen this also in other conferences in 2020. The on-line format increases the number of participants, and sometimes dramatically.

The program and speakers were excellent, as usual. The “table” wasn’t terribly useful. While we normally have many people coming by, perusing our lit, and chatting, this year we only had one person show his face that wasn’t already active with the group. An on-line “expo” section didn’t cut it.

But I do think one of the developments that will happen due to Covid-19 is the hybrid conference. In some cases, live-streaming speeches and piping in questioners has been done. But it may be better to just ask speakers if they’re willing to do it twice: once in-person, and once online, so they can adapt to the advantages of each, and reach far more people. Adding an on-line component used to be a complication and one that requires learning an extra skill set. But now we’ve been forced to develop the skill set, so adding it on might become simply standard. 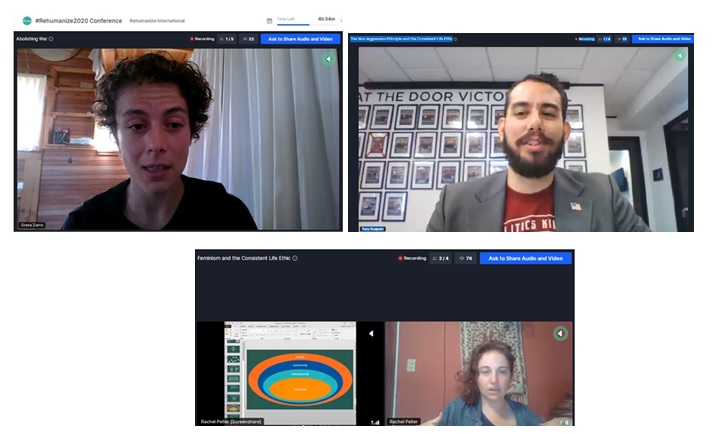 As a peace-focused activist, I was thrilled to have World BEYOND War’s David Swanson, 5X Nobel Peace Prize nominee, address a CLE crowd on the issue of whether war can ever be just.  I was also reminded of how much I like Aimee Murphy’s presentation that moves from her own personal traumatic story, to relatable experiences of relative innocence, to philosophical arguments, to her powerful assertion that human rights for all humans is central to the CLE. While I missed seeing, talking, and hugging friends, the thoughtful diverse chat comments during presentations were a delight — as was video chats with friends in the CLN booth.

That said, the Not Dead Yet speaker, John Kelly, moved me more than I expected. The killing of Michael Hickson was literally close to home for me, only one mile.  Yet John Kelly’s presentation brought the lives lost to euthanasia and assisted suicide closer to my heart than ever.

Some Slides from David Swanson’s Keynote 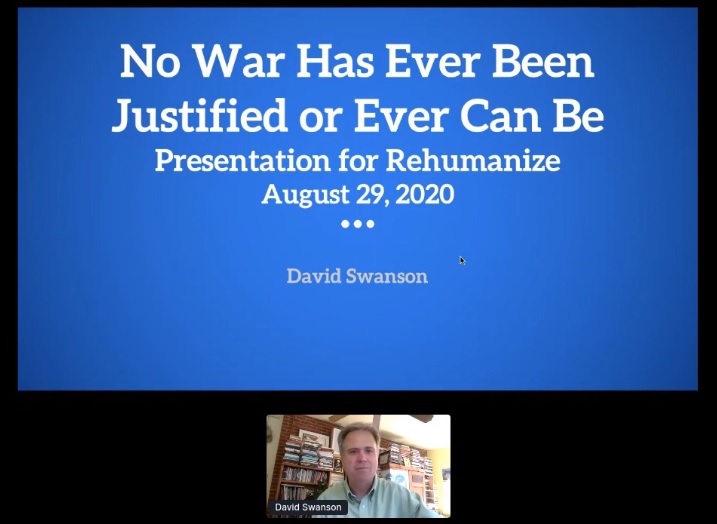 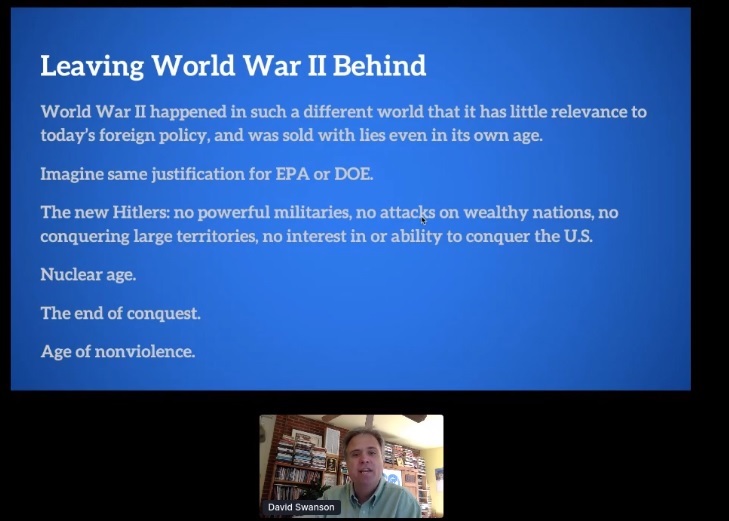 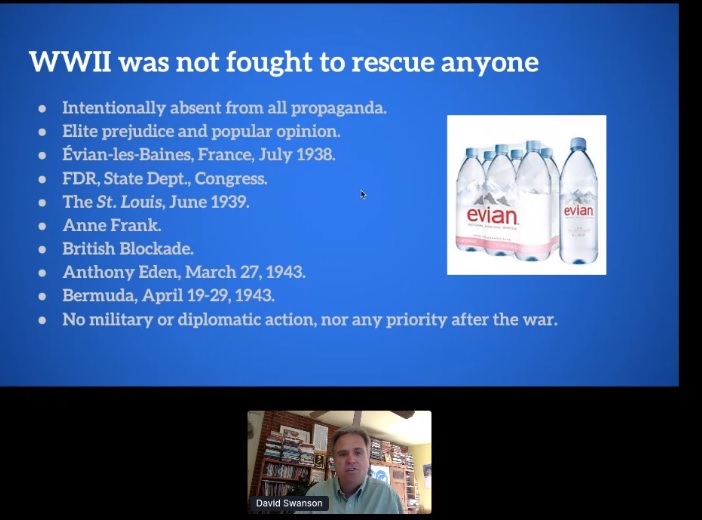 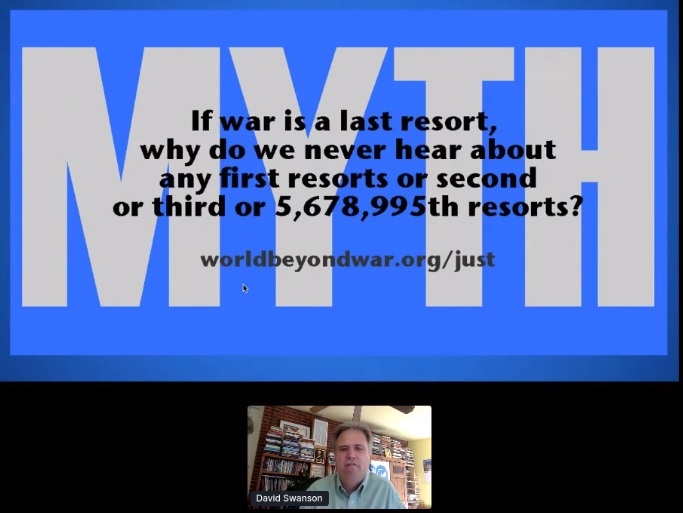