From A Christmas Carol, by Charles Dickens (1843)

Early in the novel, Ebenezer Scrooge is speaking to two men who are trying to solicit a donation to the poor. When he says he’ll donate “nothing,” they ask if he wishes to remain anonymous.

“I wish to be left alone,” said Scrooge. “Since you ask me what I wish, gentlemen, that is my answer. I don’t make merry myself at Christmas and I can’t afford to make idle people merry. I help to support the establishments I have mentioned [prisons and workhouses]: they cost enough: and those who are badly off must go there.”’

“Many can’t go there; and many would rather die.”

“If they would rather die,”’ said Scrooge, “they had better do it, and decrease the surplus population.”

Much later, Ebenezer Scrooge is speaking to the ghost of Christmas Present concerning Tiny Tim. 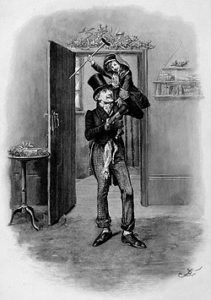 “If these shadows remain unaltered by the Future, none other of my race,” returned the Ghost, “will find him here. What then? If he be like to die, he had better do it, and decrease the surplus population.”

Scrooge hung his head to hear his own words quoted by the Spirit, and was overcome with penitence and grief.

“Man,” said the Ghost, ” if man you be in heart, not adamant, forbear that wicked cant until you have discovered What the surplus is, and Where it is. Will you decide what men shall live, what men shall die? It may be, that in the sight of Heaven, you are more worthless and less fit to live than millions like this poor man’s child.”

Dickens wrote several Christmas novellas, not just the most famous one with Ebenezer Scrooge.

Context: Mr. Filer just heard a friend explaining how terrible marriage is to a young couple after they say they’re planning to marry. The young woman’s father is also present. “Such people as those” refers to people in poverty, three of whom are in front of him listening to him say this. 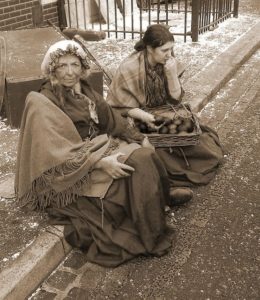 Dickens’ Christmas Carol . . . is a polemical work: Dickens was sparring with the laissez-faire capitalists whose influence in industrializing Britain sought to limit concern for the poor to running poor houses and treadmills. . . His other target was Thomas Malthus. Malthus, the intellectual granddaddy of zero population growth, had argued that population increase would inevitably lead to disaster. . .  Scrooge gives voice to the elite opinion of his day when, dismissing the businessmen who come to his office seeking charitable contributions, he opines that those who would rather die than go to a poorhouse “had better do it and decrease the surplus population.”

Two (Pro-Life) Christmas Classics: A Christmas Carol and It’s a Wonderful Life Carry a Message for All Seasons.

For another Christmas literature commentary in our blog, see: