Posted on February 2, 2021 By Rachel MacNair

Consistent ethic advocate Angela Kennedy has died at the age of 57 (November 26, 2020). She was the editor of the anthology Swimming against the Tide: Feminist Dissent on the Issue of Abortion (1997), which covered the topic of the consistent life ethic. Angela leaves behind her daughter Stevie and son Sean.

Her passion for many of the issues closest to her heart was informed by a succession of difficult life experiences. She faced many challenges and fought them with a fierceness that was an inspiration. 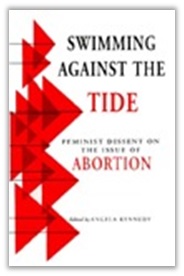 Her background in nursing informed her opposition to abortion. She also experienced two unplanned pregnancies – her two children could not have had a better mother. From nursing she went on to a career in health and safety, ending up as a sociologist before having to give up paid work because of her failing health and family responsibilities.

Angela was very aware of unfashionable issues. She made connections that other people sometimes missed. Back in the 1990s, people who raised the issue of discrimination against fat people were not always taken seriously. Too often, it was seen as a joke. Angela, however, knew that such discrimination had real effects on the lives of people who deserved better.

A long-term vegetarian, she campaigned vociferously against breed specific legislation. Some dogs who never attacked anyone are sentenced to death because of vague legislation about their supposed ancestry. This is cruel and absurd.

The long-term illness of Angela’s beloved daughter Stevie was the inspiration behind her work on ME/CFS (Myalgic Encephalomyelitis/Chronic Fatigue Syndrome). To put it simply, the supposed experts were suggesting that ME/CFS patients would respond to treatments that would work for depressed people, such as therapy and exercise. Those experts did not take kindly to criticism from the likes of Angela. They would often brand all their critics as shrill and abusive, which was both untrue and unfair.  This led Angela to write the book, Authors of Our Own Misfortune? The Problems with Psychogenic Explanations for Physical Illnesses (2012). 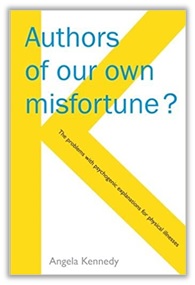 Recent developments in clinical guidelines very much suggest that Angela and her fellow campaigners will be fully vindicated.

For many years, Angela was an active member of the Labour Party. Unfortunately, her commitment to fairness was not matched by that of the party as a whole. Angela’s health deteriorated and her landlord evicted her and her adult children.

This led to a dreadful couple of years, in which Angela, Stevie, and Sean were placed in temporary accommodation whilst their local council (led by Labour politicians) refused to help them. The council repeatedly refused to provide even basic accommodation that was suitable for Angela and Stevie’s disabilities, whilst trying to trap them in a bureaucratic nightmare of endless form-filling and bombarding them with hostile comments. Their council was supposed to provide vulnerable people with suitable accommodation.

Their local Member of Parliament, also representing the Labour Party, refused to help. Even their local branch of the Labour Party ignored their plight. This suggests to me that not everyone who claims to want a better world is sincere. Angela, however, really did want to make things better.

Despite her dire situation, Angela tried to keep her spirits up and completed many lovely cross-stitch patterns. She simply never gave up.

Unfortunately, the medical profession gave up on her. Angela ended up in hospital, seriously ill, where she contracted Covid-19. Against her wishes and those of Stevie and Sean, her life support was switched off.

This is, of course, a scenario that many disabled people fear. The UK government will not guarantee a “right to live” for those who those who fear being written off by biased able-bodied people.

This is not the ending to Angela’s story that any of her friends could have anticipated a few years ago. We would prefer to remember her as lively and healthy and full of plans.